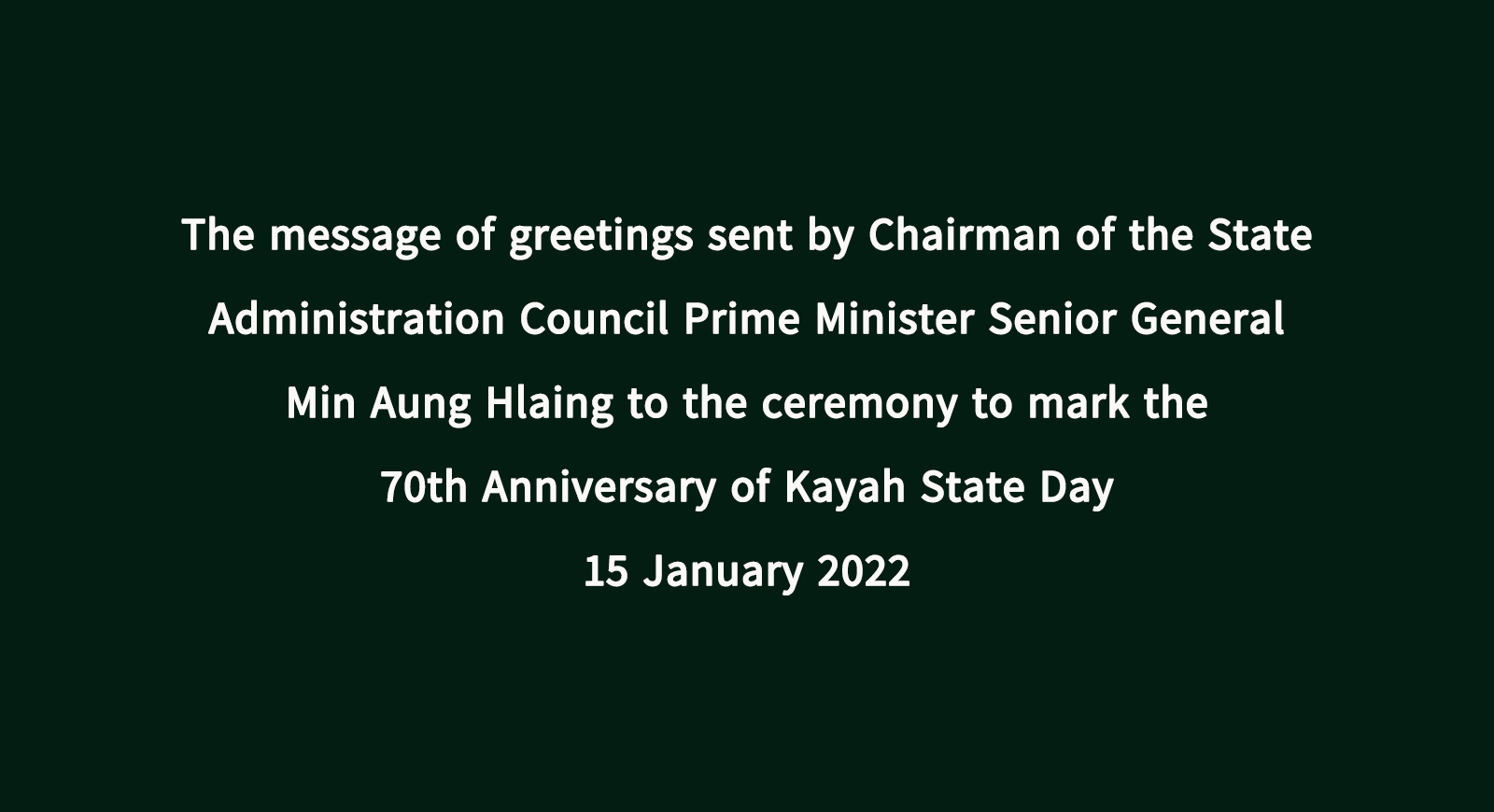 The message of greetings sent by Chairman of the State

Min Aung Hlaing to the ceremony to mark the

On the occasion of the New Year of Kayah State, I extend my greetings to Kayah ethnic nationals with wishes for them to be physically and mentally healthy with happiness for winning their inspirations and all ethnic national people as well.

The Kayinni State was involved in the Union of Myanmar in accord with the 1947 Constitution, and it was officially changed to the Kayah State based on the public desire as of 15 January 1952 according to the 1951 Constitutional Amendment Act. The day when the title of Kayah State was designated was marked the “Kayah State Day”.The Kayah State is located on the eastern mountain range, teeming with natural beauties and plenty of underground and above ground natural resources.

It is a pleasant state endowed with beauties of traditional culture. The favourable weather, friendliness, hospitalities and honesty of local ethnic nationals are attractive attributes of the state.

The Kayah State standing as a developing one is decorated with beautiful scenes, neat and tidy landscaping, honesty and transparent souls of the ethnic nationals as well as utmost efforts of local national brethren to serve the state interests.

Now is the time for ethnic national people from the state to join hands with the government for ensuring peace, stability and development of the Kayah State by grasping these sound foundations. Especially, they all need to restore the perpetual peace for posterities.

In looking back the history, the country unavoidably accepted the independence together with events of internal insurgency based on impacts of the divide-andrule policy of the colonialists, racism and isms as well as armed conflicts based on doubts among the ethnic nationals for many years. We all face that such kinds of impacts much affected the peace, stability and development of the State.

Currently, the government is making relentless efforts for building the Union based on democracy and federalism all the ethnic national people aspire. That is why ethnic nationals from the Kayah State are to participate in the work process through the genuine Union spirit taking the lessons from the past events.

As the Diamond Jubilee Union Day will fall soon, now is time for all ethnic nationals to join hands with one another through thick and thin for sharing their same future and fortune without discrimination of those from hilly and plain regions by overcoming all the challenges for serving interests of the State and the citizens.

At present, the State Administration Council taking the State responsibilities in accord with the Constitution (2008) is implementing the five-point road map and nine political, economic and social objectives. It is very important to ensure peace and stability of the country and restore perpetual peace across the nation in order to secure success in implementation. Hence, as the invitation has been extended to the peace talks for the resumption of new paces for the peace, I firmly believe that more cooperation would have been achieved for the restoration of the internal peace for all ethnic national people.

The government focuses on the interests of the State and the ethnic people will continue further cooperation with the ethnic national people in unison to emphasize the more peace and stability of the country with prosperity and food sufficiency. As “unity will bring prosperity to the nation”, all need to build the nation through united strength.

Only when all public service personnel, all civil society organizations and the entire people together with the Tatmadaw participate in the tasks to build the Union based on democracy and federalism in accord with the desire of all ethnic national people will the country successfully reach the goal in a short time.

Primarily, all ethnic national people need to have unity whereas the country is peaceful, stable and tranquil. At present, it can be seen that incitement of some foreign countries, instigation of some organizations with different opinions turning a blind eye to the interests of the State and the people, fabricated news pulling down the State into the abyss of danger, persuasion of NUG, CRPH and PDF terrorist groups and their terror acts cause wrong thoughts and disintegration of unity among the people from some areas without peace. It is necessary to consider that in consequence, it cannot bring the benefit to the State as well as it can bring danger to the State and all the people.

Upholding the Our Three Main National Causes for ensuring the perpetuity of the Union, all the ethnic national people should strive for forging the national unity and the Union spirit. I’d like to deeply urge ethnic nationals from the Kayah State to unitedly participate in the process of building mutual respect, understanding and trust with correct attitudes similar to that of all ethnic people national brethren.

I send a message of greetings and pray that may all ethnic national people residing in the Kayah State become those capable of restoring peace and stability in the region, strive for development and enhancement of socio-economy of the local people with might and main and participate in the process of raising the State and the citizen interests.